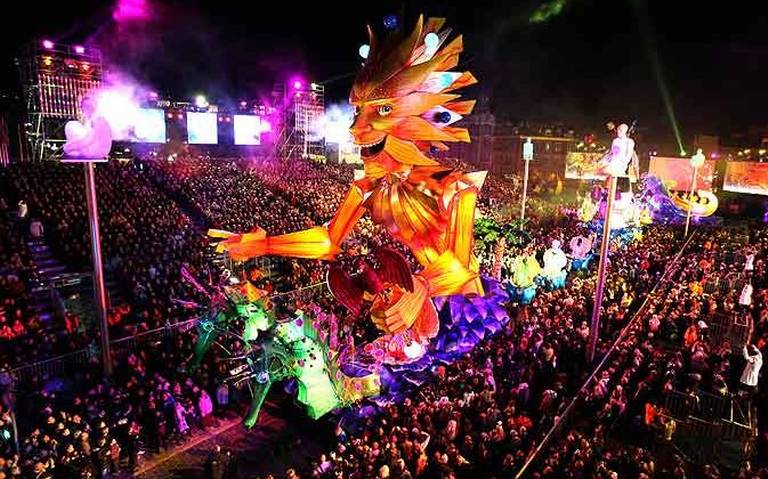 The Joy of Mazatlan Carnival

In Mexico, the months of February and March are an invitation for merriment and joy, for disguise and the possibility of being someone else for a few days. Visiting the state of Sinaloa during these dates is the opportunity to enjoy the Mazatlan carnival.

Brief History of the Mazatlan Carnival

Its antiquity, it has been celebrated since 1898, and the spectacularity of which it boasts have earned it the third place in importance among the carnivals of the world. With a singular ritual, according to which the symbolic burning of the bad mood is made, a whole week of celebration and color takes place.

It consists of the burning of a giant doll that represents some character little appreciated by the community; almost always a politician whose identity is not revealed until the moment of the burning.

In this Carnival, one of the most recognized in its country, not only is it possible to enjoy the carnival debauchery, because art and culture have also gained their space.

As in any festivity of this nature, the parade of floats is the central event of the Mazatlan carnival. It is estimated that almost a million people attend the 8-kilometer route. In it there are carriages decorated with impressive, very impressive figures.

The competitive spirit that is established between them is due to the competition that drives them to be increasingly attractive and original. Since the 90s of the last century the floats have been illuminated to enable the night parade.

Related Article: CARNIVAL OF VERACRUZ Images of Dreams and JOY that you must experience

This parade proceeds along the coastal roads Olas Altas and Paseo Claussen. Up to 30 beautifully decorated carriages circulate carrying their queens, troupes and musicians, in a non-stop dance. All this to the delight of the public, both locals and from other regions of the country, infected by the thunderous beat of drums and bands.

The corridos are very typical, musical pieces that are composed making mention of notable local people.

It may interest you: The Incredible TOURIST ATTRACTIONS in Mexico

Attractions During the Mazatlan Carnival

There are many acts that take place on these great dates. However, we will mention only the most relevant ones:

Read also this Article: The highest RUSSIAN MOUNTAIN in the world

An aspect of the Mazatlan carnival it is their interest in promoting the cultural values ​​of the region. For this reason, the Evening of the Arts is held, in which context a literature prize is awarded. This award has been won by notable Mexican writers.

Another important award is the one granted to recognize the pictorial trajectory of outstanding artists.

Other Tourist Attractions of Mazatlan ...

Strolling through the center of the town is well worth the effort, as there are several historical buildings that deserve to be visited. Among them are churches, theaters and squares, some of which have recently been restored. Another tourist attraction is the Cerro del Crestón; There is a 156.9 meter high lighthouse. Another hill, that of Vigía, must be visited at dusk to contemplate the setting sun.

Fun Article: Learn to MAKE ZIPPER for Children It's EASY

To stroll through the port, you can board some "taxis" that look like golf carts and are called "pneumonia". They owe their name to the bad press that the taxi drivers union did to this transport of the competition.

With this they tried to dissuade tourists from approaching them because they could contract pneumonia. Popular humor did the rest, as they became very popular, despite the bad propaganda. A monument to these curious carts was erected on the boardwalk.

A coastal town, Mazatlán does not stop offering tempting beaches of attractive blue and soft sands such as Cerritos, Cangrejo, Gaviotas and Olas Altas.

Gastronomy in the Mazatlan Carnival

A visit to a new region is not complete if you do not try the dishes that the locals consume. There are tourist programs to visit street feeders, as well as popular restaurants. Fish is the protagonist in these places. It is also worth visiting the "changueras", which are shrimp markets, and taste their products.

Being a very Mexican event, its streets cannot be without ceviche tostadas and the famous traditional fresh waters such as tamarind water, Jamaica's water and the horchata water as the most famous without leaving the lemon water behind

You also have to try a delicious milk and walnut sweet called "jamoncillo". Agave liqueur is also produced on these sides, having little to envy the best tequila. You can visit distilleries to learn about its elaboration, there are tourist tours that contemplate it.

You will surely like to read: The RECIPES of TYPICAL dishes of MEXICAN FOOD that you should learn to PREPARE

Holidays in the Mazatlan Carnival

It is varied and within the reach of all pockets. If you prefer not to be so close to the hustle and bustle of Carnival, it is advisable to stay to the north, in the so-called Golden Zone. The advantage is that it is close to the beach. On the contrary, if you want to be in the epicenter of Carnival, the best thing to do is to stay on the Malecón or in old Mazatlán, very attractive for its colonial charm. It is recognized that Mazatlán is well worth a Carnival to know and enjoy.

Article of Interest: 10 Best TIPS to Make a CURRICULUM VITAE for Tourism and HOTELS

Error: View 3b7f7e0qtd may not exist